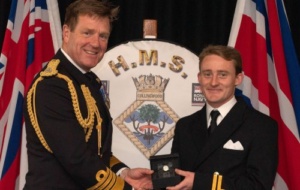 Jack joined the Navy in 2019. He received the prize at the annual Ceremonial event, from First Sea Lord and Chief of Naval Staff, Admiral Sir Benjamin Key KCB CBE ADC. The prize is given to the Initial Warfare Officer who achieves the highest marks in navigation for the 2021-2022 training year at HMS Collingwood.

Jack is now serving as the Officer of the Watch 2 and Intelligence Officer on HMS Northumberland. During his career, he has served onboard HMS Pembroke, HMS Richmond and HMS Prince of Wales. He says that his most rewarding appointment was being involved in Operation CETO.

Jack commented: “The news came as a very welcome surprise, almost a year after I completed my training and while Northumberland has been busy preparing for our next OP CETO deployment. I’m very grateful to the officers and ratings of HM Ships Richmond and Pembroke who trained me and to the staff at the Navigational Training Unit. Without them, I would not be where I am now.”

Society for the Study of French History conference

Blooming lovely in the Master’s Garden

This summer, the Master’s Garden…

Nick Schlee has an exhibition…