Society for the Study of French History conference 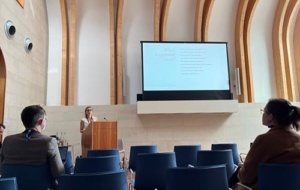 The Society for the Study of French History conference took place this year in Exeter College, Oxford from 10 to 13 April. The theme was “Encounters”, which welcomed a wonderfully broad number of papers spanning hundreds of years of French history. It was the first time since July 2019 that the conference was able to take place in person.

The conference lasted four days and was a social whirlwind of catching up with different scholars. On the first day we were welcomed at the Maison Française to appreciate French culture through French wine and cheese. The second day consisted of three different panels, two keynote lectures and a well-earned conference dinner at Exeter. The third day saw another gruelling schedule of four panels and another keynote speaker. On the fourth and final day, we had a long discussion about community history projects and a roundtable on the French presidential elections, as this was a week before they were decided.

Thanks to a truly nerve-wracking twist of fate, my panel was the very first panel of the whole conference. Our focus was on “Intimate Strangers”. My paper looked at bordels militaires de campagne, mobile French military brothels that were present in North Africa and France in the early 20th century. I focused primarily on how the French military authorities moved Moroccan women selling sex to France after sex work was banned in the metropole after the Second World War. I spoke about the reasons for this (rooted primarily in preventing sexual relationships or sexual violence between French women and Moroccan men), as well as what this experience would have been like (terrible living conditions, poor wages, and a very high workload, with women seeing up to 30 clients on a busy evening). The other papers were presented by Will Pooley and Sasha Rasmussen, who looked at experiences of witchcraft in France from 1790 to 1840 and friendship between women in Paris and Moscow at the fin de siècle, respectively. We had a rich discussion about migration and histories of emotion, drawing parallels with social outcasts and oppressed groups. The questions were thought-provoking and engaging.

The conference was academically rigorous, as well as a wonderful opportunity to revive social networks with other historians of France and the French empire. It was academically exhilarating, offering us all new approaches to our research and the drive to push our work further. I am hugely grateful to the Old Members for the opportunity to have been able to attend this year.