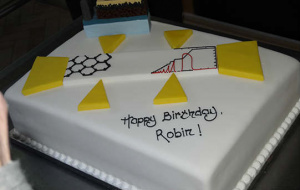 2013 marked the 60th birthday of Professor Robin Nicholas, Fellow and Praelector in Physics. In September students, family, friends and colleagues came together in College to celebrate this, and his career.

Robert Martin, Head of Physics at Strathclyde University, was responsible for the organisation of the event, and he reports:

“The 20th September saw a group of about 75 students, colleagues, family and friends of Robin Nicholas came together in the College Hall to help celebrate his 60th year and to honour him for the wide range of positive contributions made to their careers. These were clearly evidenced by the efforts made by many people to attend – including journeys from Japan, Hong Kong, USA, and many European lands – as well as the good wishes from those unable to do so. 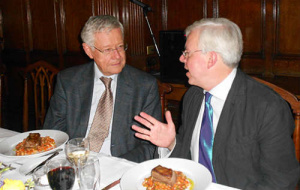 The excellent dinner followed an afternoon of talks at the Clarendon Laboratory, filled with a combination of scientific memories and reminiscences of life in the “Nicholas Group” as well as a specially designed birthday cake and presentation of the book “Robin in 3D”. Robin’s distinguished career thus far was celebrated with photographs, a live demonstration of Faraday rotation using a pulsed magnet carried from Toulouse and numerous amusing anecdotes.”