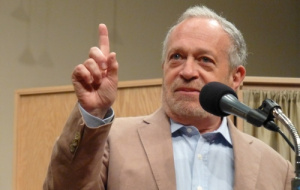 Professor Robert Reich (1968, PPE) will be discussing his new book, The System: Who Rigged It and How We Fix It, today (Tuesday, 28 July) at a Guardian Live event. Professor Reich is Chancellor’s Professor of Public Policy at the University of California at Berkeley and Senior Fellow at the Blum Center.

The System is an in-depth analysis of the role of elites in the American political system and how voters can enact change. The book has been praised by Elizabeth Warren, who called it “both a diagnosis and a call to arms”, and Bernie Sanders, who said that “one of the most important voices in America, fighting for an economy that works for all people and not just those at the top.”

Reich has served in the administrations of Presidents Gerald Ford, Jimmy Carter, and Bill Clinton (1968, BPhil Politics), and as an advisor to President Barack Obama. He has written fifteen books, including The Work of Nations, and writes a weekly column for the Guardian.

Professor Reich will be talking with the Guardian’s Head of Opinion, Jonathan Shainin, at 7pm BST. Tickets for the interview can be booked on the Guardian website.

You can buy The System on Amazon and Blackwell’s. Robert Reich is also active on Twitter and has his own YouTube channel.

UCVC performs “If ye love me”

The Chapel Choir has joined with…