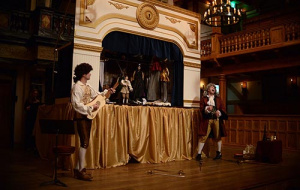 The research of one of Univ’s Fellows has resulted in the revival of a slapstick version of Shakespeare’s Hamlet, performed by puppets.

Tiffany Stern is our Beaverbrook and Bouverie Tutorial Fellow in English and Professor of Early Modern Drama. Professor Stern’s recent research on a 1710 outrageously slapstick adaptation of Hamlet entitled Der Bestrafte Brudermord (Fratricide Revenged) has resulted in a revival of the play. Texan company The Hidden Room Theatre worked with Professor Stern to perform this rarely seen 1710 adaptation of Hamlet as it may have been intended: as a puppet show. Read more…

The play was performed at the Globe Theatre in London on 31st May. The evening performance was introduced by Professor Stern.