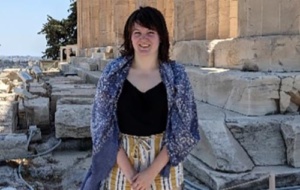 I am currently working on research about the impact of topography on local identity in archaic Greece. Athens is an ideal place to travel to support such research: there are several sites and museums in the city and surrounding area with architecture or artefacts from this period. Additionally, ancient Athens was an urban centre with its own built environment, while the region is both hilly and coastal, with islands close by. As such I had ample opportunity to focus on both natural and constructed features of the landscape. I spent a good deal of my stay in Athens walking around the city, noting locations of ancient natural and architectural landmarks, and how they are often (even now) visible from each other.

While in Athens, in addition to climbing Mt. Lycabettus and visiting the sites of the Acropolis, the Areopagus and the ancient agora, I visited the Agora Museum, the Acropolis Museum and the National Archaeological Museum. These museums are home to significant artefacts from the archaic period, including in the archaic sculpture gallery in the Acropolis Museum (where photos are not permitted). The National Archaeological Museum houses artefacts from around Greece, not just Athens. When considering my line of research, this variety of find find-spots along with the information about the materials is particularly helpful, not just in terms of characteristic local resources but also consequently what the built environment of a given locality would actually look like.

I also took the opportunity to spend a day on Aegina, getting the ferry from the Piraeus port in Athens, to experience the coastal geography (and a different ancient polity) of the region. I visited the archaeological site of Kolona and the museum there, which is an excellent example of the complex stratigraphy which occurs on sites with many phases of occupation. It was also a good comparison with the topography of Athens: the temple of Apollo at Kolona is on a fortified promontory in much the same way that certain sacred and political sites of Athens were (the Acropolis, the Areopagus etc.), and as such would have been very visible, not only from the land but from the sea. This excursion was for me a very useful illustration of the ways in which rival poleis in ancient Greece could be physically very close, and how the topography of Greece made them even more visible to each other as they approached one another by land or sea.

Over the course of the week, I became much more familiar with the geography of the region and have begun to focus my research on ancient community identity more on the geography, built environment and myths of promontories in and near archaic poleis.

See further research details and images in this PDF.