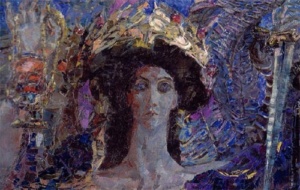 This journey could not have been undertaken without the generosity of the Roger Short Memorial Foundation, to which I am extremely grateful. Thanks to Father Ian Sherwood, for his kind hospitality, and his readiness to share his endless knowledge. And my most heartfelt “Thank you” to Mrs. Victoria Short, who most kindly shared some music and some of her time with me, in a delightful exchange of impressions, insights and reflections.

On the eve of departure, sleepless…

The reason for this trip is that, during this first year of my MPhil in Slavonic Studies at Oxford, I have taken Bulgarian and Old Church Slavonic. I chose to do so because my main topics of research is the religious renaissance that took place during the Silver Age, that is to say, during Russia’s Modernism (roughly 1890-1920/30). The Russian modernists faced some existential questions: as Russians, they struggled with their impression that Russia was both European and “non-European.”¹ And as modernists—just like the French, the English or the German modernists—they were more than done with the present; they sought to usher in an utopian future that, they were sure, would return mankind to the primordial past, to an age of blissful perfection.

Thus, for the Russian modernists spatial and temporal dichotomies were breaking down and borders were becoming extremely porous. As they concluded (rather logically) being neither in Europe, nor in “non-Europe” is the same as being both in Europe and “non-Europe” at the same time. With regards to time, their eyes were set on a future, a future that looked like a past and seemed so ineluctable that it already felt present. 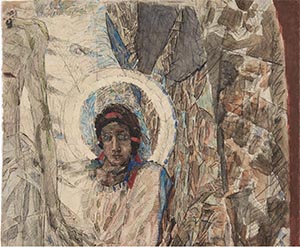 How was this perceived breaking down of temporal and spatial axes conveyed in their works? Well, one of their devices was to “rediscovery” and “make intelligible” the “essence” of the past, that essence that was also the essence of the future. Thus, their works filled with poems, writings, paintings and scores filled with religious imagery, phraseology, themes and rituals from Christian Orthodoxy. That religious content was however used to express the inevitable coming of a new era, the advent of the impending utopian future.² Similarly, given that spatial boundaries were no longer existent, nothing was distinctively “eastern” or “western”. As a result, e.g., Russian icons could be painted applying western techniques, and wearing “historical” dresses.

What I find so appealing about the modernists at large, and the Russian modernists in particular, is that, while their solutions might appear bizarre nowadays, the questions they contended with appear distinctly current. Is Eastern Europe so “Eastern” that its “Eastern-ness” merits mentioning—i.e., there is really a “Western” and an “Eastern” Europe? And if so, is there really a “Western Europe” and an “Eastern Europe,” or is there “Europe” (France, Spain, Italy, Germany) and its weird eastern deviation, Eastern Europe?

And what about the future-past vs. present relation? If we are to judge by the current bout(s) of cultural nostalgia, it would seem that we too are living in a time in which we wish our future looked like our past, and most definitely had nothing to do with our present. 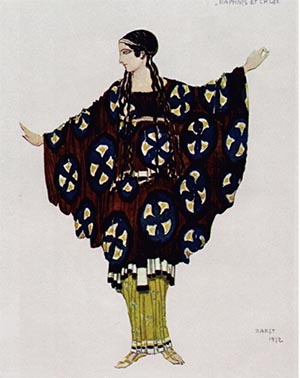 Leon Bakst’s design for one of the Ballets Russes “Afternoon of a Faun” (1912).

However, the study of the Russian modernists and their religious renaissance comes with a danger, one that I have sought to confront in my first year at Oxford. The religious material they were recycling comes from Russian Orthodoxy. As a form of Christianity, is Russian Orthodoxy accessible, intelligible, to a scholar that does not come from an Orthodox cultural background? In true “Eastern Europe” fashion, the answer is yes and no. Indeed, the overarching ideas and concepts are the same, but emphasis is put on different aspects. Most importantly, the material expression of faith (sacred spaces, iconography, rituals, prayers) are markedly different. Hence, this last academic year I have tried to learn as much as possible about Orthodoxy, and most specifically, the beginnings of Orthodoxy in the Slavonic world. With that in mind, I took Church Slavonic and Bulgarian (Orthodoxy came to Russia from Constantinople through Bulgaria) and with that in mind I am now travelling to Bulgaria and Istanbul.

In this trip I want to see and hear as many of the things I have encounter academically during my first year in Oxford as possible. I hope to see the practise to the theory I have studied for one year. But most importantly, in this trip I want to wear Modernists glasses. Maybe if I look at what they looked, and I do so with a similar mindset, I will be able to understand their proposals better. Thus, I want to find the familiar in the unfamiliar, and the common denominator in that which appears markedly foreign. In a word, I want to have an eye for boundaries, and most especially, for those boundaries that are permeable, whether they are so spatially, culturally, or temporally.

¹It is tempting to say “Asian,” but to avoid lengthy scholarly discussions about orientalism, eurocentrism and colonialism, let’s leave it in “non-European.”
²Needless to say, the Russian Orthodox Church did not appreciate this Modernist recycling of religious imagery.