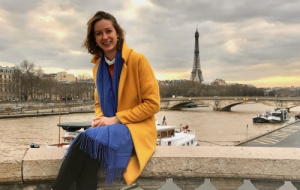 Alice Eccles is in her final year studying for a BA in Jurisprudence with Senior Status. Her team recently won the Northern European regional rounds of the Monroe E Price Media Law Moot Court Competition.

What did you do between finishing school and coming to Univ?
Having read for a bachelor’s degree in history at the University of Cambridge, I had the opportunity to pursue postgraduate study at Yale as a Paul Mellon Fellow, during which time I spent a year as a special student attached to the American Studies department and another year earning a Master’s degree in history.

Any understanding of the at once generative and jurispathic nature of the law I had gained whilst studying was shaped, deepened, and challenged during my time working at human rights non-profit Reprieve. Specialising in combatting the death penalty and abuses in counterterrorism, colleagues at Reprieve demonstrated the possibilities and tensions of working to represent individual clients whilst at the same time seeking to enact structural change and reform. Interested in learning more about client representation, I spent the six months immediately prior to coming to Univ, volunteering for the Capital Appeals Project, a Louisiana-based non-profit law office providing representation to indigent defendants sentenced to death.

Why did you choose to study law after studying history?
Law and history share some important similarities. The telling of history and the functioning of the law are both formidable means of exercising power; neither is normatively inert and both demand that we engage questions of justice and justification. Ultimately, my desire to study the law was born of the desire to practise it.

This desire to practise was prompted by admiration for those who have used the law as a tool to empower people disenfranchised by broader socio-economic structures, a means through which to achieve some semblance of redress, and a framework within which to understand the value and function of particular norms. In this, I am guided by the determinedly political and peculiarly metaphysical thought of Robert Cover, to whose work I was introduced by friends at Yale. In his review of the 1982 US Supreme Court term Cover casts off conventional characterisations of the law – law as a set of institutional rules and principles, law as a set of policies and mechanisms for social control – and proposes a new paradigm: law as a narrative prism, “a resource in signification that enables us to submit, rejoice, struggle, pervert, mock, disgrace, humiliate, or dignify.” This proposal acts as a reminder of the ways in which the effects of the law come to rest in and on persons, and the considerations that ought, as a consequence, to inform its practice.

In some ways, the Senior Status degree brings certain challenges. I have, for example, found it hard to balance my desire to do well academically with my desire to be working; and to balance the want to be and contribute as a full member of the Univ community with the want to keep up with personal and professional relationships outside of Oxford. I have also spent some amount of time adjusting to the unique forms of argumentation in the law, which differ to those often employed in history.

In other ways, the Senior Status degree possesses a number of advantages. It has been such a gift to undertake this degree more confident in my own intentionality in choosing both its focus and its timing. As a result, I have found myself able to face with more cheerfulness and resilience some of the stresses of study. Further to which I have been able, as I have moved through the degree, to have in my mind and to develop an understanding of the kind of lawyer I want to be. This has been true both of the areas of law in which I have taken a particular interest, as well as the values I want to apply in developing a practice. The people and communities within Oxford to which I have been introduced have provided rich and kinetic examples of the ways in which certain kinds of intellectual work can be connected to theories of fairness and justice so as to affect specific and particular change in the world. 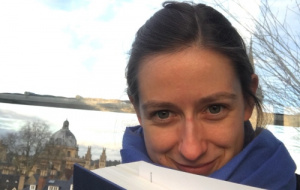 Why did you get involved in Refugee Info Bus? What do you do as a Trustee?
I took the decision to join the board of Refugee Info Bus on account of the particular work they were continuing to do at a moment in which popular attention had pivoted away from the condition of refugees in Greece and France. By providing internet access to those seeking to claim asylum in Europe, the Info Bus affords individuals not only with vital means of communication and knowledge-sharing, but also with some small amount of the dignity and humanity found in the pursuit of normal daily activities – checking football scores, listening to music, and reading the news.

As a Trustee, my role is principally supervisory, assisting with determining the direction and development of the charity through strategic, operational and governance planning, as well as overseeing fundraising activities, including the development and approval of budgets. The chance I have had to learn from the charity’s service users, volunteers, staff and other board members has been invaluable.

What have you learnt from living in different places?
There is much I continue to learn and more I ought to have learned from living in the UK and America, but one thing that has proved particularly influential is the extent to which democratic capitalism appears to be working only for specific parts of the population in both countries. The mechanisms through which this has and continues to be enacted and the effects of such are hugely complex and without doubt harbour a number of important differences as between the two countries; the urgency with which this needs to be addressed, however, is the same.

How do you get to know a new city?
When it comes to getting to know a new city, if I can I like to walk alone, without a particular destination in mind or a timeframe in which to once again return to where I started. Walking in such an unstructured way is the speed at which I am able to notice things, and should I trundle some routes more than once, to see familiar faces too.