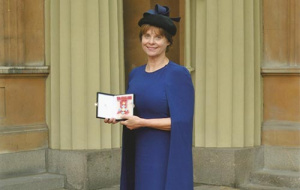 Professor Sarah Harper, CBE, Supernumerary Fellow at Univ and Clore Professor of Gerontology, Oxford, gave the keynote address on population ageing at the Nobel Prize Dialogue in Tokyo in March 2019. This was her fourth Nobel Prize Dialogue, after Stockholm in 2014, Seoul in 2017 and Madrid, also in 2019.

Professor Harper explained how the Nobel Prize Dialogue came about:

“The Nobel Prize Dialogue commenced in 2012 as a cross-disciplinary meeting bringing together Nobel Laureates, world-leading scientists, policy makers and thought leaders to discuss key global issues. A forum for scientists and non-scientists alike, these meetings aim to deepen the dialogue between the scientific community and the rest of society.

“The Nobel Dialogue Week on Ageing was the first Dialogue to address the challenges and opportunities of this demographic change. Held in Stockholm in 2014, the participants were invited to attend both the Nobel Prize Ceremony and the celebratory dinner in the City Hall the following day. I took my 17 year old daughter as my guest, and despite having attended an array of Oxford celebratory High Tables, I have never experienced such a magnificent feast – resplendent with Swedish royal family, gold, jewels and seemingly a serving host per diner! I told my daughter it had taken me 50 years to experience such an occasion, she is just 17!

“In 2017 I was invited to speak at the next Ageing event in Seoul – the Age to Come – where 20 scientists and five Nobel Laureates attended the dialogue, and this year, 2019, saw two further events, Tokyo in March and Madrid in May. Though smaller than the original Dialogue in Sweden, the five Nobel Laureates and around eight invited scientists presented both their own research and sat on multi-disciplinary panels. In Tokyo, for example, after giving my plenary on “Understanding life expectancy and healthy life expectancy”, I found myself in a panel conversation with Angus Deaton (Noble Prize Economics 2015) on society, and with Tim Hunt (Nobel Prize Medicine 2001) on technology, interviewing Japanese robotics guru Yoshiyuki Sankai, and sharing a platform with a Robot called HAL (?!).

“The Nobel Dialogues provide a stimulating forum for discussions across the generations, between interested public and researchers, and among policy makers and communicators. Attended by students as well as the general public and the political and academic communities in each country, they are also increasingly attracting high level attention. Princess Hisako, aunt of the current Emperor, joined us in Tokyo, and King Felipe VI of Spain at the Dialogue in Madrid.

“As a student attendee commented, ‘these dialogues are about the sharing of ideas, so to take all of humanity up.’ A bold idea, but who better to try but the Noble Prize community.”