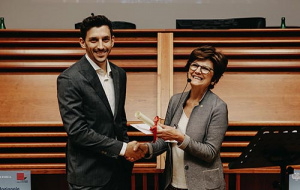 Before coming to Univ, Luca studied Physics at the University of Bologna, Italy. He works as part of the ATLAS Oxford Group, which is working on one of the four major experiments currently running in the Large Hadron Collider (LHC) at CERN.

Last August, Professor Daniela Bortoletto of University’s Department of Physics praised Luca’s work on the decay of the Higgs boson, which contributed to scientists finally observing its decay into a pair of bottom (b) quarks. It is thought that this interaction accounts for 60% of all the Higgs boson decays but it has taken seven years, following the discovery of the Higgs boson, to observe it.

Dr Bernardini was instrumental in the creation of the European Physical Society, leading the planning for the organisation. He was the third recipient of the Tate Medal in 1972, bestowed by the American Institute of Physics, which recognises international leadership in the physics community.