President of the British Institute of Radiology 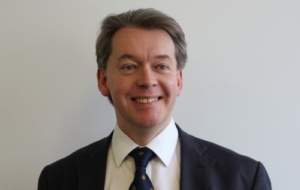 Professor Stephen Keevil (1983, Physics) has been appointed President of the British Institute of Radiology (BIR)), the oldest medical imaging society in the world, for 2022-24. Having previously been President of the Institute of Physics and Engineering in Medicine (IPEM), he is the first person in 25 years to serve as president of both institutes.

Professor Keevil is Head of Medical Physics at Guy’s and St Thomas’ Hospitals and Professor of Medical Physics at King’s College London. Stephen Keevil holds an MA in physics from Oxford University, an MSc in medical physics from Surrey University and a PhD in nuclear magnetic resonance spectroscopy from the University of London. He trained as a medical physicist in the NHS and then undertook a series of research and academic posts in magnetic resonance imaging (MRI) physics.

Having spent 12 years as Head of Magnetic Resonance Physics at Guy’s and St Thomas’ NHS Foundation Trust, now as Head of Medical Physics in the Trust, Professor Keevil leads a team of around 180 staff. He was previously the chair of the Safety Study Group of the International Society for MR in Medicine (ISMRM). In 2008, Professor Keevil was awarded honorary membership of the Royal College of Radiologists and Fellowship of the ESMRMB.

Steve also holds a Licence in Theology (LTh) from the University of Wales Lampeter and is warden of St James’ Church, Tunbridge Wells. He is a Liveryman of the Worshipful Company of Scientific Instrument Makers and a Freeman of the City of London.

Professor Stephen Golding, Emeritus Professor and Chair of The Chalet Trust, has also served as president of the British Institute of Radiology.

Odysseus Archontikis has just been announced…

Editor of The Wall Street Journal

Emma Tucker has been…

Throughout 2022 we have published…