Player of the Match 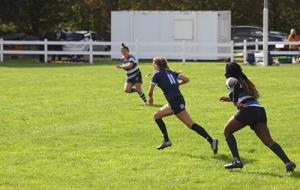 Clodagh Holmes (2018, Medicine) was named “Player of the Match” in her first ever Blues match, after scoring two tries.

Clodagh starting playing rugby with Univ WRFC in her first term, taking to the game quickly. In Trinity term she started going to University training sessions and was picked to go on their preseason tour to Gibraltar in September. The match against Bath RFC took place on 6 October, with the score finishing 70-0 to Oxford. Clodagh started as 11, as pictured on the photo.

“It was great to play my first proper match for the Blues and getting two tries in made it even better. After a lot of hard work on tour and throughout preseason it was the icing on the cake to come away with a win just before term officially started, and I was so pleased to be named player of the match. I’m looking forward to the rest of the season and can’t wait to play more rugby!”