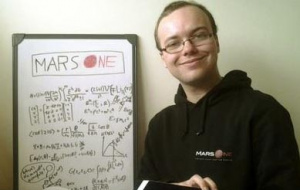 Univ student Ryan MacDonald (2011, MPhys) is one of five Britons in The Mars 100 shortlist, in Round Three of the Mars One Project Astronaut Selection Process.

The Mars 100 have been selected from a pool of 660 candidates, drawn from the initial 202,586 applicants for the $6bn one-way manned mission to Mars. The project aims to set up a permanent human colony on the Red Planet in 2024. The Dutch non-profit organisers plan to film the mission for a reality television series.

Ryan, 21, said: “I would like to go to Mars for a dream. Humanity’s greatest strength is our ability to dream of a better world, to imagine a future and to inspire a generation to bring it to life.”

Read more about the Mars One Project here.

Watch the Round Three trailer here.

Ryan specialises in Astrophysics and Theoretical Physics at Oxford. For his Masters project, he is working on designing a Thermal-IR camera for a future sample return mission to Mars’s moon Phobos, which could one day select the first landing site on the moons of Mars. He has also worked on Venus Express, and helped to build the Higgs Hunters Zooniverse project to look for exotic particles at the LHC (Large Hadron Collider).

He is the president of the Oxford University Space and Astronomy Society. He was awarded The Gibbs Prize for Practical Work (Part A) in 2013 and (Part B) in 2014 by the University of Oxford Physics Department. He received a University College Oxford Scholarship in 2012-2015 for exemplary performance in University examinations (3 separate awards). He was also awarded the University’s MPLS Outreach Prize in 2014 in recognition of extensive involvement in public outreach activities in the sciences.