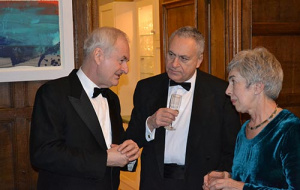 Broadcaster and writer Paul Gambaccini (1970, PPE) returned to Univ this week to speak to students at the annual gathering of the Univ Music Society.

The dinner was also attended by the music tutors – Prof Daniel Grimley and Matthew Cheung Salisbury – as well as Sir Ivor and Lady Crewe, the Chaplain, Director of Music Giles Underwood, and Director of  Development William Roth.

Mr Gambaccini made an extremely generous donation of more than 200 Opera CDs to the Library for use by the members of the Society. His talk was about how music helped him to get through the difficult year he endured in the face of the Operation Yewtree investigation. After nearly a year of scrutiny, the CPS informed him that they would not bring forward a case against him. He spoke about how listening to music and playing the piano had helped him to find the peace he needed to be able to deal with the emotional stress that he faced during that period. Mr Gambaccini recently gave evidence to the House of Commons Home Affairs Select Committee about his case, and his subsequent vindication.