Paintings in memory of Bob Hawke 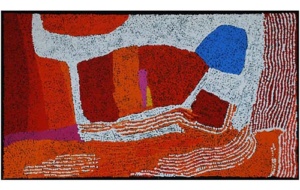 The three paintings illustrated on this page form a magnificent gift to the College from the Revd Dr Arthur Bridge AM (1976) to commemorate the life of the Hon. Robert Hawke (1953), Rhodes Scholar and Honorary Fellow of the College, and Prime Minister of Australia, of whom he wrote to Sir Ivor Crewe, “Hawke did much to recognise the plight of our Indigenous Aboriginal People (who were not even citizens until 1967 but had lived in our land for over 60,000 years) and specifically to restore their rights through better health, education and housing.”

In such commemoration, Arthur wrote that he would like to give the College some indigenous art, of which he himself has long been a collector and supporter. The largest painting, entitled “Ngayuku Ngura – My Country” had been a gift to him from the artist; the two smaller paintings given together with a friend fall under the same generic title.

These paintings are the work of Tommy Yannima Pikarli Watson. He was born around 1935 and for much of his life lived in Western Australia, close to the borders with South Australia and the Northern Territories. He began painting only in 2001 and soon became widely recognised for the distinctive style in which he portrayed images of the landscapes and oral and ceremonial traditions of his people going back, it is said, for over 50,000 years. He became extremely prolific; a book on his work published in 2011 makes comparisons with Kadinsky, Klee, Matisse, Mondrian and Rothko, amongst others. He died in 2017. There is an extensive Wikipedia article on him.

These paintings need not necessarily be viewed as presented here. Tommy Watson worked with his canvas flat on the ground and one is left free to choose the orientation – the paintings arrived strung to be hung either in portrait or landscape mode. My choice of a landscape presentation owes as much, if not more, to where they have been hung in the Butler Room. I leave it to the individual viewer to decide whether the images represent simply landscapes, or whether there are people or animals depicted.

Their arrival at Univ was itself a saga, punctuated by the pandemic. Initially, we were due to receive just the two smaller paintings. By the time they were packed and dispatched early in 2020, the world was closing down, and the shipment was held up for 48 hours in Singapore. They arrived mid-March, just as the College was preparing to close and, to my horror, I discovered when I came to unpack them that they had been packed face to face and had adhered slightly due to the heat during that stop in Singapore. But, with the imminent lockdown, they had to be left as they had arrived.

We must therefore profoundly thank Arthur Bridge for his immediate offer to replace them; he sent Ngayuku Ngura directly from his home, this time to arrive safely at the beginning of 2021. Most generously, too, he invited us to keep the other two paintings if it proved possible to separate them.

Happily, modern technology, including the use of a hair dryer, came to the rescue as part of their successful separation, and nothing remains of their ordeal thanks to the skills of Georgina Dennis, the art restorer who has done much other recent work for the College. 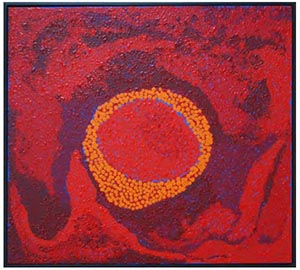 Old Members thinking just of the Hall may be forgiven for thinking that the College’s art collection consists solely of portraits. We do have other works, most notably a set of four watercolours by William Turner (“of Oxford”, not J.M.W.) that hang in the Lodgings, and the three John Piper watercolours of the College in the Payne Room. There are also paintings that were purchased by the JCR in the 1960s which I have had restored and intend to hang in suitable spaces – a topic for a future article. Sadly, the Fellows of the 1930s declined the offer of Sir Michael Sadler to give the College part of his collection of Impressionist paintings, deeming them “modern rubbish”. It is fitting, therefore, to record that a review of an exhibition of Tommy Watson’s work in Sydney in 2021 identified his work as being in the tradition of the Impressionists.

Apart from his pastoral work and support for Indigenous art, Arthur Bridge is best known in Australia for his significant role in the life of Australian music as the founder and CEO of the charitable foundation, Ars Musica Australis, which has commissioned many pieces of music, and sponsored many young Australian artists.

Longer standing Old Members will appreciate Arthur’s recollection of his arrival at Univ when he was greeted at the Lodge with the exchange, “Do you know Robert Hawke?” – “Yes I do.” – “Well then Sir, we are enquiring, do you drink as much as he does?”

Ivor Crewe did not recognise the other participant. I did immediately since I was then already a Fellow!

A Tale of two galleries

It is with great sadness…