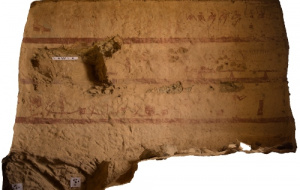 During its last fieldwork season, the Oxford Epigraphic Expedition to Elkab, in southern Egypt, successfully relocated a painted tomb originally discovered in the 19th century, but whose exact whereabouts within this ancient Egyptian necropolis had since become unknown. Through its inscriptions, we can precisely date the tomb to the reign of King Ptolemy III (3rd century BC), at the time of the Greek rule of Egypt. Despite the fading of much of the tomb’s decoration, digital technologies have allowed us to record and study it in all its original beauty.

Univ’s Egyptologists contribute to the Expedition both in terms of staff – Dr Luigi Prada, Supernumerary Fellow in Egyptology and Assistant Director of the Expedition – and postgraduate students – Ellen Jones, (2012, DPhil Oriental Studies – Egyptology). The Expedition’s Director was W. Vivian Davies, former Keeper of the Ancient Egypt and Sudan Department at the British Museum.