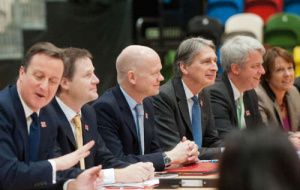 It is the highest office of state in the UK for a Univ member since former Fellow Harold Wilson resigned as Prime Minister in 1976. Clement Attlee (1901) is still the only former Univ student to be Prime Minister, serving from 1945 to 1951.
Of the other major offices of state, Univ has so far produced two people who between them give us one Chancellor of the Exchequer and two Home Secretaries. Robert Lowe (1829) was Chancellor in 1868-73 and Home Secretary in 1873-4, and Herbert Gladstone (1872) was Home Secretary in 1905-10.

In 2010, when Hammond was appointed Secretary of State for Transport, he became the first member of Univ to hold a seat in the Cabinet (as opposed to being Prime Minister) since Philip Cunliffe-Lister, Lord Swinton (1902), who was Secretary of State for Commonwealth Relations in 1952-5. The image below shows him as British Air Minister, meeting with the German General Erhard Milch, in October 1937.