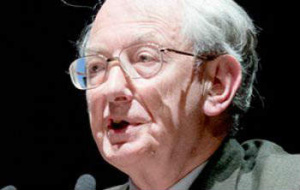 Honorary Fellow Professor Martin West has been awarded the prestigious Order of Merit, and was one of four of Univ’s former fellows or Old Members to receive recognition in the 2014 New Year Honours list.

Professor West, former Classics Fellow (1963-74) and Honorary Fellow of University College, is the seventh classical scholar to have received the Order of Merit since its institution by Edward VII in 1902, and the first since Sir Ronald Syme in 1976. The Order has no more than 24 members at any one time, and Professor West admits “I was very taken aback by the invitation, and it is all the more surprising in that I am not a publicly known figure like some other members of the Order such as Sir David Attenborough or David Hockney. It will be encouraging for others in ancient world studies to see that pure scholarly endeavour may still sometimes find recognition in the highest circles”.

Also featuring in the 2014 honours list was Lindsay Irvine (1977), who has been appointed CB for services to the RAF and Defence. With a Classics degree from Univ, Lindsay subsequently read Law at City University London, and after a short time at the Bar he was commissioned into the RAF Legal Branch in 1986 following officer training at RAF College Cranwell. Lindsay has served at home and overseas in various ranks, including periods at the Permanent Joint HQ Northwood, MOD Head Office and HQ British Forces Cyprus. In 2009, he was appointed to Director of RAF Legal Services as an Air Vice Marshall. RAF Legal Services provides legal support worldwide to the RAF and other areas of the Defence community in areas including public law, International Humanitarian and Human Rights Law, military discipline and aviation law and has had officers deployed on every major combat air operation since 1991.

Benjamin Wicks (1995) also received an honour for services to defence this year, appointed OBE for recent Government project work. After a degree in History and Modern Languages at Univ, Benjamin pursued a career in finance in the City of London initially, before electing to sacrifice this career in 2005, and work for the Ministry of Defence.

A Fellow at the College from 2000-2002, Dr Gregor Irwin was the fourth Univ name in the honours list this year. He was appointed CMG for services to economic analysis in foreign policy. After Univ, Gregor worked at HM Treasury and the Bank of England, before moving to the Foreign Office as Chief Economist. He arrived here just a few months before the Lehman Brothers was declared bankrupt, pushing the global financial system into crisis and many countries into recession. Dr Irwin’s job was to work with colleagues at home and overseas to ensure all our foreign policy is informed by an economic understanding of the world. Gregor left the Foreign Office at the end of 2013 to join the consultancy firm Global Counsel.