Methana to Edirne by Bike 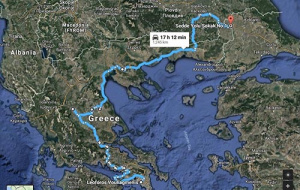 Logbook 3 – 24 September (Please excuse any mistakes or gaps, this was written on a phone in a tent after long days of cycling…)

We hand over the Bavaria that we’ve been sailing with around the Cyclades at 10 in the morning. After a goodbye to the others, most of which are flying straight back to England, JH and I look for a post office in Alimos to send back the flee infested sleeping bag and -mat. As the post office is closed on a Saturday, we have a quick breakfast – the Greek seem to live of Iced Coffee and bagle shaped sesame buns – and cycle to Piräus, the industrial harbour of Athens. The Greek capital together with its harbour is home to 4.5mio people and not a love on first sight for most visitors: busy, hectic and dirty do miles of suburbs extend on the coast. Compared to 2012, in the direct aftermath of the financial crisis, when I was last in Athens with my school, the city seems economically much better off again. The streets seem cleaner, there are hardly any closed shops and when I told a baker that I was German and wanted to cycle through Greece he laughed and said: “Does Merkel cycle? I really disliked Germans for a while. Now I think your just quite nice crazies.” 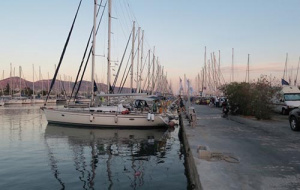 We find an open post office, buy a new sleeping mat, two mugs and some screws for our bikes and by the time everything is organised, we have missed the early ferry to Poros. Instead, we decide to go to Aegina, an island between Athens and the Peloponnese, and then to continue to Methana, just on the mainland of the Peloponnese off Poros the next morning.

Aegina turns out to be absolutely beautiful, almost like a micro-copy of Greece. We spend the afternoon cycling from Aegina-Port via an orthodox nunnery to Aphaia, on the other side of the island. Endless Pistachio groves, fig and pomegranate trees grow beside the road, we can even pick them while cycling past. I have never seen Pistachios growing: They sit on dark-leafed trees in bundles of pink and orange shining coatings. Like walnuts or almonds they are covered in a fleshy envelope and only when they dry does the cover fall off and reveal the nut. 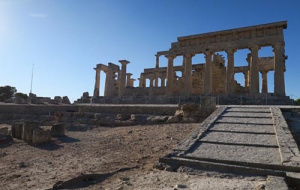 The Aphaia temple is a doric temple, built 500 BC on the spot of an even older sanctuary. The temple was dedicated to the goddess Aphaia, similar to Athene, but of a much older cult. It is much better preserved than the Acropolis and almost no tourists find there way here. A couple is preparing baskets full of grapes and cheese just outside the temple and we ask them what the occasion is. The two are heading the culture preservation club of Aegina and this very evening there is a festival procession re-enacting the myth of Aphaia. After having pitched our tent we join the festival. Aphaia, a goddess, is loved by Minos, the king of Crete. In order to escape his courtship, she runs into sea where, with the help of Poseidon she turns invisible and reaches Aegina. Some fisherman who find her as attractive as Minos did don’t stop chasing and pursuing her, so invisible she runs to the top of the island’s highest mountain. The inhabitants can only see the light of her torch wandering around and later erect a temple on that mystic spot.

After coffee outside the tent – a night without wild dogs – we cycle back for the port, buy Pistachios for the ride and at 11 o’clock take the ferry over to Methana. The costal road in direction of Corinth is extremely hilly, it is hot and the air smells of pine and eucalyptus sap. The mediterranean lies turquoise some 400 meters below us. From up here the sea seems to have no similarity any more to the windy and wavy challenge it was on the sailing boat. It is 1pm when we start cycling – the next weeks we will skip an hour around noon to avoid burning, but today we want to make at least some kilometres north before the evening.

Passing the ancient amphitheatre of Epidauros – if you let a coin drop in the middle of the stage, even the person up in the 50th row can still hear it drop. We end up close to a monastery from the 14th century called Agnouda, and set up the tent. There is a lot of odd noise during the night, which we ignore. In the morning, some of our bags are ripped open and our cooking utensils spread all over the place. We are not sure whether it was foxes (which we saw in the evening) or dogs that messed around with our stuff. 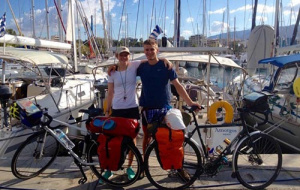 Only two kilometers from where we pitched tent last night lies the Agnountos monastery, a byzantine building from the 14th century. According to the popular founding myth some travellers traversing the region saw a dim light on a close hill one night. They followed the light and found a buried but glowing (?!?) icon of the virgin Maria. On the spot they built a monastery in her honour.

Around lunch time we reach the Isthmos (‘neck’) of Corinth, that small land- bridge connecting mainland Greece with the Peloponnesian peninsula. A long queue of boats is allowed to pass, before the bridge over the only 23m wide canal that connects the Gulf of Corinth with the Saronic gulf rises out of the water and lets us pass.

As we have some flea business to do (yes, JH brought flees into this relationship, it was the running gag on the boat, story doesn’t have to be repeated here), we finish at 2pm in Loutraki.

Other: Just ordered Milk for Müsli we brought – best travel food so far. JH did 100 km in flip flops. Fish farms observed from above – a lot to ascent/descent. 56km/h speed max. More flee rash. Expert now in how to get rid of them, in theory. Counted 50+ mini churches alongside the road.

The above is an extract from  Johanna’s Travel Report.