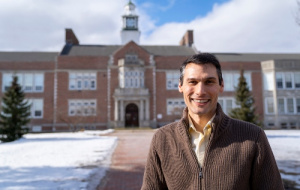 Dr Sam Zager (1997, MPhil Modern History) was elected in November to the Maine State House of Representatives. Since 2011 he has been practising as a family physician in Maine.

Dr Zager was born in Subic Bay, Philippines. Before attending Univ, he went to Brookdale Community College and received a B.S. in history and a minor in Spanish at the U.S. Naval Academy in May 1997. After Oxford, he obtained an M.D. from Harvard Medical School.