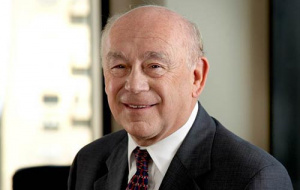 The College has a network of more than 770 Univ members, past and present, living and working in the United States. These include many Rhodes and Marshall Scholars. Old Members are prominent in almost every walk of life: serving their respective professions and contributing crucial expertise across the country. The American Friends of University College Oxford (AFUCO) work closely with Old Members and the Development Office to accommodate the wishes of our US donors and to facilitate support for Univ and its students.

AFUCO has been actively fundraising for the College for more than 40 years, founded and directed by Mr Paul Chellgren (1966, Economics), Honorary and Foundation Fellow. Mr Chellgren is an American citizen, who came up to Univ in 1966 to read Economics as a postgraduate. He was Chairman and CEO of Ashland Inc, a global diversified energy and chemical company, until he retired in 2002. He is now an Operating Partner of Snow Phipps, a private equity firm with $2.5 billion of assets under management.

Mr Chellgren is a leading benefactor of the College and, in addition to managing AFUCO, he created two Oxford-Chellgren Scholarships in Economics. He also gives to Chellgren Bursaries, Chellgren Travel Scholarships, and he is a member of the William of Durham Club.

Where it all began

In 1980/81, Paul Chellgren noticed a gap in Univ’s fundraising in North America. Although the American Trust for Oxford University existed as an organisation comprised of one volunteer, no active solicitation for the College was taking place in the States. Coordinating with the then Vice-Master George Cawkwell and the Development Fellow Leslie Mitchell, a letter was sent out to a US mailing list comprising of 254 people in Spring 1981. Funds were then sent through the American Trust. Spring 1982 led to $10,000 in donations from 69 Old Members. In the years following, 50-100 Old Members regularly responded. 1991 stands as a particularly impressive year, with $67,000 raised.

In 1987, then Master Kingman Brewster, who had been President of Yale 1963- 1977, suggested that Univ set up their own 501(c)3 corporation – similar to a Registered Charity in the UK, a 501(c)3 is a type of non-profit organisation in the US that is exempt from federal income tax under section 501(c)(3) of Title 26 of the United States Code.

American Friends was thus set up as a Connecticut-based 501(c)3 (code 0210475) by Winthrop, Stimson, Putnam & Roberts (now part of Pillsbury), who still act for the charity today. Winthrop kept all of American Friend’s documents until 25 October, 1999, when they were all sent to Paul Chellgren. Univ was one of the first Oxford colleges to have a US based 501(c)3 entity to assist with American fundraising. Paul’s work included setting up the entity, obtaining a letter from the IRS to permit it to raise tax-deductible funds, organising record-keeping and IRS reporting responsibilities, soliciting funds, arranging for proper recognition to donors, and keeping both the College and its American supporters aware of all that was done, providing total transparency to everyone.

The three original directors were Kingman Brewster, Bill Bernhard and Paul Chellgren. Dan Coquillette was added for some time, but ceased involvement in 2015.

1998 was the first filing of a 990 (Internal Revenue Service form that provides the public with financial information about a non-profit organisation) by Kelley Galloway Smith Goolsby PLC, who still file AFUCO’s accounts. AFUCO has been in a steady state since that time.

To find out more about tax-efficient giving from the USA via AFUCO, and international giving in general, please visit our Making a Gift page.

“Without Paul Chellgren and the effective fundraising that AFUCO has carried out, not one of our major fundraising campaigns would have reached its ambitious target. Our American donors have been crucial to our fundraising success as a College, with funds raised through AFUCO comprising between 10% and 50% of Univ’s philanthropic support in a given year. Overall, just short of £20,000,000 has come to the College through AFUCO since its inception. We have Paul to thank for this, and for his skilful cultivation and stewardship of our American supporters.”
Sir Ivor Crewe, Master 2008-2020

“I was appointed master of University College in 1998, a year before the College was due to launch a major fundraising initiative in celebration of the 750th anniversary of its endowment. At that time British academic institutions lagged behind the United States in soliciting financial support from alumni and yet the need for such support had become ever more apparent. Paul Chellgren’s achievement on behalf of the College over the 40 years spanning my Mastership and the years before and after has been immense and is eminently worthy of the highest recognition.”
Lord Butler of Brockwell, KG, GCB, CVO, PC (1957, Classics), Master 1998-2008 and Honorary Fellow

“For 40 years Paul has been a model of consistency. He has directed us to the big picture, while simultaneously managing all the details required of such an effort. I have been a part, or an object, of fund-raising for my school, my American college, and the law school I attended, for many years, and I am not aware of any individual volunteer at any of these places, which included Yale and Harvard, who has shown the dedication over so many years that Paul has shown at Univ.”
William Bardel (1961, History), Financial Consultant and Independent Director of Hudson City Bancorp, Inc.

“I am forever grateful to Paul Chellgren. It is hard to express in words how helpful and meaningful the Chellgren scholarship was to me as an overseas DPhil student. The scholarship and all his support reflect the caring Univ spirit so well.”
Dr Burcu Hacibedel (2000, Management), Senior Economist in the IMF’s Strategy, Policy and Review Department

“I don’t accuse Paul of venality. Paul supports many causes and people tempt him to support theirs, but he will resist. I recall a North American Reunion at which an Oxford Development Officer pursued Paul all day eventually finding him by “crashing” a reception. Paul politely listened to the Oxford “pitch”, explained Univ was his main charity, and the man left unsuccessful. Univ is also lucky to have a friend in Deborah Chellgren. Together, Paul and Deborah have been friends to Univ and many of us.”
Sean Denniston (1987, History), Transportation Industry Analyst at Federal Aviation Administration

“Paul Chellgren by his example and his polite but steadfast commitment to Univ over so many years inspired me to add my support to what is clearly a most worthwhile cause. He did all this while for much of the time running an important major corporation here in the United States. His leadership role for Univ is something few Oxford colleges could have seen matched or emulated. We are indeed all very fortunate, and my thanks to him and congratulations on a job very well done.”
Robert Kibble (1962, Chemistry), Co-founder and Managing Partner of the venture capital firm Mission Ventures

This feature was adapted from one first published in Issue 12 of The Martlet; read the full magazine here or explore our back catalogue of Martlets below: