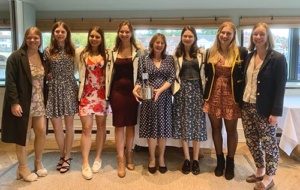 A group of Univ Boat Club Old Members gathered together at Leander Club on Saturday 22 October to welcome as their guests for lunch the current active members of our Club. Several of the younger members joined straight from a morning’s training session on the water with their coach Jonathan Cheesman, and all were looking impressively bright and fit in their College blazers. The occasion could best be described as an informal Boat Club family event for a cross generational celebration of the fun that all have shared in rowing in a boat in Univ colours.

Sunshine and autumnal colours combined to make the river at Henley the perfect backdrop, whilst the graceful surroundings of Leander Club were an ideal setting for rowing enthusiasts of all ages. The oars and photographs of Olympic and Henley Regatta heroes and heroines from many decades decorate the walls to create a special atmosphere and inspire enthusiasm for what can be achieved in the sport.

For the Old Members it was an opportunity to meet up with old friends, to talk of former times and to catch up on more recent news. But it was also fun to mingle with the active members to hear first-hand about current training plans, last season’s triumphs and the hopes for the year ahead. Those far-off years for some since they last rowed in a boat seemed suddenly to be brought much closer.

Lloyd Arnold, the men’s captain, gave a review of the Club’s experiences earlier in the year in Summer Eights, and at outside regattas. Univ had a strong crew for Summer Eights but were thwarted by misfortune and mishap from reaping the successes that their merits deserved. The second and third eights won blades however, and silverware on display won in regattas elsewhere was testimony of the good season that the Club could look back on.

Lloyd intrigued those listening by recounting how a number of Univ oarsmen had been recruited during the Summer Vac to appear as extras in a film being made of “The Boys in the Boat”. This is the book that tells the epic true story of the University of Washington crew that overcame many difficulties to represent the USA in the 1936 Berlin Olympics, winning the gold medal. The film’s producers needed real rowers for the various races featured. Univ’s oarsmen appear in a number of guises – as “Penn State” for university races in the USA, and as “Czechoslovakia” in the Olympics themselves. So we shall shortly be able to see Univ rowers on the Big Screen. Watch out for the film!

Becca Turner, the women’s captain, reported on the achievements of the women’s crews. Of course the major triumph was the Women’s 1st VIII attaining the Head of the River for the very first time. Becca spoke of the Club’s tremendous achievements in a beautifully understated way. Nearly all of the members of the Head crew were present, and after some modest reluctance were finally persuaded to stand up to receive thunderous applause from all. In addition to the Headship triumph the women also won trophies at outside Regattas including Bedford Amateur Regatta, Oxford City and Llandaff.

Very happily among the Old Members present was Margaret Chamberlain. Margaret was the first woman to join the Univ Boat Club. A photograph was taken of the Head of the River crew members there, with Margaret in the centre holding the HOR trophy itself. Thus bringing together the pioneer and pinnacle of women’s rowing in Univ.

With many of last year’s rowers continuing as active members this year the Club is in excellent shape. Our rowers are looking forward to the year ahead with keen anticipation. What is certain is that the tradition of Univ men and women experiencing fun and friendship rowing in a boat on the Isis will continue to thrive. We wish them every success.

A date for the next Univ Leander lunch has already been fixed for Saturday 3 June 2023, just one week after Summer Eights. Make a note of these dates in your new 2023 diaries and turn out in strength to first support our athletes, and then meet up with them in the elegant surroundings of the Leander Club.

Photo credit and with thanks to Max Bolton (2021, PPE)

I am sat writing this…