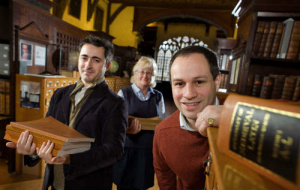 On 11 December 2013, the British Academy publishes the final part of its monumental Dictionary of Medieval Latin from British Sources, with more than 58,000 entries in nearly 4000 pages. Dr Richard Ashdowne, College Lecturer in Linguistics, is the current Editor of the Dictionary.

The British Academy has overseen the project since work on the Dictionary began in 1913, and in the last 100 years over 200 researchers have worked on the publication.

The Dictionary’s completion is a result of decades of rigorous research into a wide array of material from the medieval period. This includes poetry, sermons, chronicles, scientific texts, legal documents, state records, accounts and letters. After originally being based in the Public Record Office when it was in Chancery Lane, the project is now managed within the Classics Faculty of the University of Oxford and consists of the Editor (Dr Richard Ashdowne) together with five assistant editors, two consultant editors and a database developer.
In the Press Release issued by the British Academy on 9th December, Dr Richard Ashdowne said: 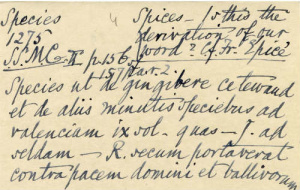 “This is the first ever comprehensive description of the vocabulary of the Latin language used in Britain and by Britons between AD 540 to 1600. For the last hundred years, the project has been systematically scouring the surviving British Medieval Latin texts to find evidence for every word and all its meanings and usage. Much of this fundamental work was done in the early years of the project by a small army of volunteers, including historians, clergymen, and even retired soldiers; they provided the project with illustrative example quotations copied out from the original texts onto paper slips – an early form of crowd-sourcing that had previously been used in the preparation of the Oxford English Dictionary. During its existence the project has accumulated an estimated 750,000 such slips. Nowadays, in addition to this invaluable resource, which covers a vast quantity of material only available in the form of the original manuscripts, we also have access to large electronic databases enabling us to examine the works of authors such as the Venerable Bede more thoroughly than ever before.”

The Dictionary’s completion will be marked by a conference in December, which will be attended by editors from the international dictionaries of Medieval Latin. The project’s history is also narrated in a display in the Bodleian Library from 6 December 2013 to 6 January 2014.
For more information, see the BBC News article.