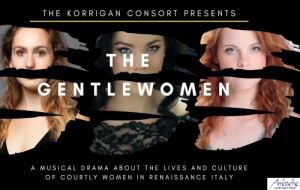 Truth is often darker than fiction. 6 months after the death of Duke Alfonso II at the Court of Ferrara, the Concerto Delle Donne gathers to perform one last time. Anna Guarini (daughter of the famed poet Giovanni Battista Guarini) has been murdered by her sadistic husband, Ercole Trotti. Laura Peverara, Anna’s fellow singer, is struggling to cope with the loss of her friend, the violence of court, and the fear of the unknown. Lucrezia D’Este, abuse survivor and embattled noblewoman, is back in Ferrara for the last days of the D’este regime. Featuring top-notch Early Music and Renaissance specialists from around Oxford and London, this unmissable opera collage will explore gendered violence and women’s resilience in Renaissance Italy.

This production is kindly sponsored by the Ambache Trust and supported by OCLW as a part of the Re-Dress: Women Composers project.