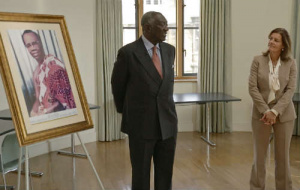 Univ welcomed His Excellency John Kufuor (1961, Exeter College), former President of Ghana, on 2 October 2014, to meet with other highly prominent scholars and philanthropists to discuss “Succession in politics and how to make transitions of power work smoothly.”

The meeting was facilitated by Univ Fellow, Professor Ngaire Woods, Dean of the Blavatnik School of Government. The former President also formally donated a photographic portrait of former Prime Minister of Ghana Dr. Kofi Busia (1941) to the College. Dr. Busia was a Univite and the College’s second black African student. He took a BA in PPE at Univ and earned a DPhil in 1947. From 1969-1972, Dr. Busia served as the Prime Minister for Ghana.

Sir Ivor Crewe, Master of the College, said, “It was an honour to host President Kufuor at University College. We are very grateful to have a formal portrait of one of the College’s world leaders, Kofi Busia, who joins the esteemed company of Univ alumni Clement Attlee, Harold Wilson, Bill Clinton, Bob Hawke and Festus Mogae in our portrait collection.”
Busia is one of three African heads of government produced by Univ. One is Honorary Fellow Festus Mogae (1965, PPE), former President of Botswana, and the other is Sir Edgar Whitehead KCMG OBE (1923), who was Prime Minister of what was then called Southern Rhodesia in 1958–62