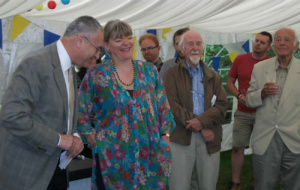 Jane Vicat will be leaving Univ this summer after more than thirty years of service to the College.

Jane Cook-Yarborough came to Univ in 1980, working in a temporary position under Gwynne Ovenstone in the College Office. When Christine Griffiths succeeded Gwynne as College Secretary in 1987, Jane continued in her role, and then herself succeeded Christine in 1999.

After the untimely death in 2004 of Senior Tutor Clare Drury, the College Office was reorganised. Anne Knowland was appointed Senior Tutor, and the post of College Secretary was discontinued. Jane however re-emerged as Welfare Registrar in 2009, the position in which she has remained until now.

On 1 August, a farewell reception was held for Jane in the Fellows’ Garden, attended by the Master, Fellows, office staff, scouts, porters and gardeners. Everyone at Univ wished her well for the future, in which she will start a new life in Dartmoor with her husband, Giles.