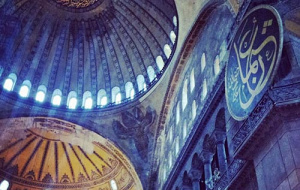 Istanbul, through my eyes, is a city of contrast. With Byzantine architecture and Roman underground systems meeting giant telecom towers and narrow streets littered with present day political flyers. I met Rob in the hostel the morning after the evening I arrived in the city, and we spent a few hours getting our bearings by strolling down Meşrutiyet Caddesi. The road itself gave insight into the city; a wide expanse bustling with hoards of people, with narrow side streets fracturing off at both sides. It was down these side streets where we discovered an eclectic mix of sports bars, curiosity shops and traditional Turkish eateries. Rob and I were unable to resist the temptations of the dessert bars, opting to eat some Sütlaç whilst observing the comings and goings of the residents of the city from an elevated bar overlooking the road. Here we spent some time planning the rest of our time in Istanbul, before heading back to dine in a restaurant at the base of the Galata tower.

We attempted to see the Blue Mosque the following morning, but due to restricted entrance times to non-Muslims we were unable to go in. Instead, we explored the Grand Bazaar. To an extent to was saddening to see imitation branded goods being sold in the bazaar rather Turkish products, but speaking to the Turkish people, who are amongst the friendliest people I have met, buoyed the experience. One feature about the city, which struck me, was the large number cats. This was very serendipitous for me, though it slowed the pace of exploring the city due to my attempts to pet a good number of them (much to Rob’s annoyance!) 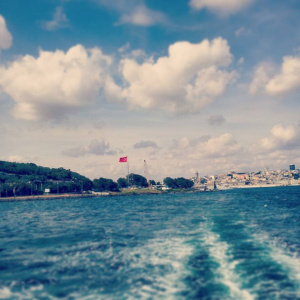 On the third day we took the ferry to the Asian side of the city. The 20-minute journey was punctuated with many interesting sights, including the Haydarpasa Railway Station. The station itself was gifted to the Sultan Abdülhamid II by his German ally Kaiser Wilhelm II in 1906, the German influence is evident from the Germanic, neoclassical design. Sailing past it, you could imagine trains from Baghdad pulling in, to trade exotic Middle Eastern goods. The journey was also marked by many Turkish flags fluttering on buildings straddling the Bosphorus, this is a characteristic common to all Turkish regions I have visited and I believe shows a strong sense of national unity. The Asian side of the city was very interesting, and I enjoyed wandering through the streets. One thing that stood out was the degree to which different areas were politicized, and how this was so openly demonstrated through graffiti, flyers and banners strung across the roads. 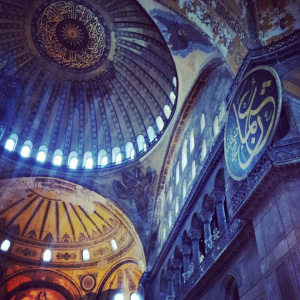 The following day we decided to pack with the remainder of sights we had not yet visited. Due to the wet weather, we began the day by exploring the Istanbul Modern. The interior had a chronological layout, and showed very strongly how alive and rich the Turkish art scene remains to be. I particularly enjoyed the layout of the museum, and how you could easily see the different trends in the Art scene, and how this matched up to the development of Turkey as a state and it’s place internationally. This was shown most strongly through the influence of French impressionism on Turkish art. The afternoon was spent visiting Hagia Sofia, which is a remarkable architectural feat. The interior, with it’s preservation of both Christian and Islamic influences, together with the way the light dances across the inside of the domes was truly spectacular. 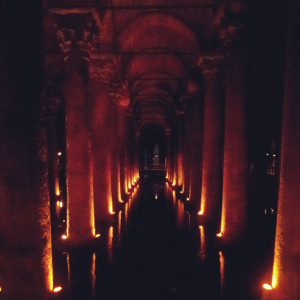 We then visited Basilica Cistern, which was my favourite part of the visit. We luckily stumbled across the obscure entrance thanks to a helpful recommendation from a fellow traveller. After tripping down a narrow staircase, we were confronted with a large underground network of pillars, and suspended walkways over a few feet of water. It was remarkable to see hundreds of fish darting around in the water, around the remnants of the Roman influence on the city. It was particularly interesting to learn that it was built in the reign of the Byzantine emperor Justinian I, who I studied for Roman law. The diversity of the city, and its many influences from different regions particularly stood out when visiting this subterranean system.

On the final night, explored what a man working in the hostel described as ‘the artist’s quarter’, to the North West of the city. Here we dined at a very good restaurant, and got to experience the young professionals of Istanbul, which again demonstrated the modernity of such a wonderful city.

My time in Turkey provided me with a fundamentally unique experience, which I could never have experienced without the benevolence of a Roger Short Scholarship.