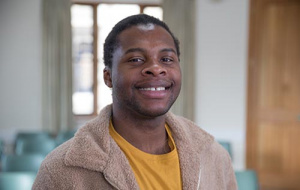 Oliver Smith, a tutor at Halesowen College in Dudley, is one of the winners of this year’s Inspirational Teachers Awards. He was nominated by Michael-Akolade Ayodeji (2018, PPE), an undergraduate at Univ.

The awards recognise the importance of school or college teachers in encouraging bright pupils to realise their potential and make a successful application to Oxford. This year ten teachers received the award. All of the teachers were nominated by first-year students and are invited to an awards ceremony in May. The University has run the scheme since 2010 and this year received 84 nominations from all of over the UK.

Michael-Akolade discussed why he nominated Mr Smith: “What made Mr Smith an inspirational teacher was his ability to relate to everyone. He would recommend books by philosophers, sociologist or fictional authors which were outside our syllabus but facilitated critical analysis of ideas and systems. This laid the foundation for my getting more engaged with the subject topics, reading around my syllabus, attending talks and seminars on interesting motions beyond the A Level scope.”

Challenge yourself for Aspire

Aspire are looking for amazing people…