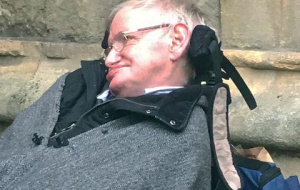 Oxford colleges have lost out to their Cambridge counterparts for the past three years, but underdogs Balliol resoundingly beat Cambridge’s Wolfson College by 190 points to 140 to take the 2016-17 trophy.

For only the second time in the programme’s 55-year history, the trophy was presented outside the studio, at Gonville and Caius College, Cambridge, with Professor Hawking saying: “I have said in the past that it is not clear whether intelligence has any long-term survival value – bacteria multiply and flourish without it. But it is one of the most admirable qualities, especially when displayed by such young minds.” He continued, “Many congratulations to both teams but especially to Balliol College Oxford on becoming series champions on University Challenge, a programme I have long enjoyed.”

Our congratulation to Balliol College on their fantastic achievement.