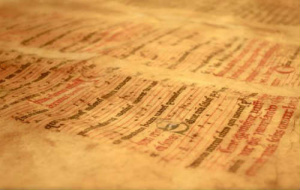 Dr Matthew Cheung Salisbury’s research on the medieval Hawick Missal Fragment has inspired three powerful new events for the Scottish Borders for 2013 and 2014.

At the end of last year, we reported on how Dr Matthew Cheung Salisbury, stipendiary lecturer in music at Univ, helped to identify an 800 year old medieval holy music manuscript and assess its significance. Dr Salisbury translated the text of the Hawick Missal Fragment from the original Latin and transcribed the music into modern notation. Shortly after this, and with Matthew’s help, the Fragments Project (of which Dr Salisbury is a key member) brought together a group of singers and the first ever recording of the music of the fragment was made at the chapel of Worcester College, Oxford. The fragment has inspired a whole series of events and community interventions across the Scottish Borders in 2013 and 2014.

The beautiful Border abbeys of Jedburgh, Kelso and Melrose are host to three major events of the Fragments project, with each event taking its inspiration from a colour of the fragment, beginning at Jedburgh Abbey on Saturday 20 July 2013 with Fragments of Blue, the precious and sparingly used blue of illumination: the decorated initials. Fragments of black follows blue at Kelso Abbey on Saturday 14 September, the black of the liturgical texts. Fragments concludes at Melrose Abbey in the lead-up to Easter 2014 with Fragments of Red, the red of the music stavelines and rubics: the instructions for action.