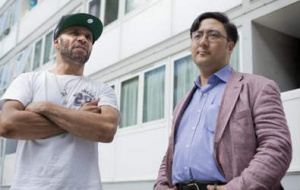 A new work has been created by renowned DJ and electronic artist Goldie, inspired by the Hawick Missal Fragment that Univ’s Dr Matthew Cheung Salisbury had led the interpretation of.

In 2012, Dr Matthew Cheung Salisbury, stipendiary lecturer in music at Univ, helped to identify an 800 year old medieval holy music manuscript and assess its significance. Dr Salisbury translated the text of the Hawick Missal Fragment from the original Latin and transcribed the music into modern notation.

In July 2013 we reported how the Fragments Project (of which Dr Salisbury is a key member) brought together a group of singers and that the first ever recording of the music of the fragment was made at the chapel of Worcester College, Oxford. Later in that year, the award-winning composer Michael Nyman wrote a work inspired by the themes of the project, with the music from the fragment as its starting point. As musical director of the project, Dr Salisbury worked with him to develop the background of the work, discussing the fragment’s music and to illustrate the project’s historical backdrop. Nyman held the premiere for his composition at Kelso Parish Church on 14 September 2013.

The latest news in this project is that a new work has now been created by renowned DJ and electronic artist Goldie, inspired by the medieval music manuscript, and will be performed for the first time at Glasgow Cathedral on 30 August.

The performance on 30 August, performed by musicians from all over Scotland, will be accompanied by a talk from Goldie and a Q&A session with members of the audience.