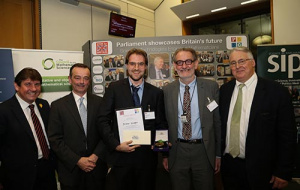 Kristian won the Gold Medal, with a prize of £2000, in the Mathematical Sciences category for his poster “Modelling Removal of Toxic Chemicals from Flue Gas”. The poster was based on his DPhil thesis which models the operation of purification device converting gaseous chemicals into liquids in order to determine its efficiency.

The STEM for Britain initiative is organised by the Parliamentary and Scientific Committee, with the competition finals and awards ceremony taking place in the House of Commons.

Kristian has previously been awarded the Early Career Mathematicians Catherine Richards Prize for his article “Exploring Steiner Chains with Möbius Transformations”, which was subsequently published in Mathematics Today.