Germany to Iran by bike 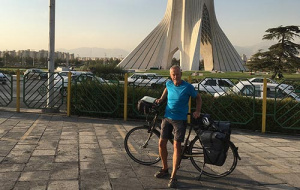 In Autumn 2019, Peter Harnisch (1983, History) completed a bicycle tour from Munich, Germany to Tehran, Iran. He cycled more than 5,200 km over seven weeks.

Peter’s journey followed the Danube river to Bulgaria, then via Istanbul across Turkey towards the Iranian border to reach Tehran. Peter was interviewed for Abendzeitung Muenchen as he began his journey. His tours, since 2013, have begun along the Danube. Over the last few years, he has visited various cities in Germany as well as Moldova, Ukraine, Armenia and Georgia.

Peter commented that for him the tour is more than just a sportive adventure, it was a way to get insights into the countries in the southeast of Europe and Asia Minor. His next plan in two years time is go through Turkey and Georgia to Baku in Azerbaijan.

Keith Dorrington and Matthew Frise have…