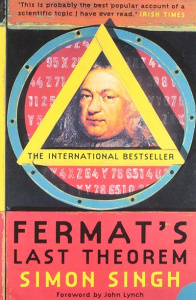 This was the first book in a while that really grabbed my attention. I read it in about February of Year 12. Until then I’d been sort of stumbling around in school, enjoying various things, but without focus. I’d begun to narrow down my options for university, the time was fast approaching when a choice would need to be made, but there was still so much I wanted to do. One Saturday morning I sat down and began to read this book, which I’d been recommended a while ago, and had been sitting on my shelf for a long time. I soon found I was unable to put it down, lunch came and went with me still reading, and by tea-time I’d finished it, and announced my intention to study Maths. It was a magic worked by Singh’s narrative that held me enthralled. From Pythagoras’s Theorem and Diophantine Equations all the way through to elliptic curves and modular forms which were the subject of the Taniyama-Shimura conjecture which Andrew Wiles half-solved in order to imply Fermat’s Last Theorem in 1994, the tale of this problem which went unsolved for centuries both delighted and amazed me, while at the same time covering the basics of some really interesting mathematics. It was a taste, a glimpse of what studying Maths could be.

Beginning in Ancient Greece, with Pythagorean Triples, and the “discovery” of irrational numbers, Singh introduces the first steps of mathematical reasoning. He then moves to 17th century France, and recounts the life of Fermat, and the unusual sort of mathematician he was, as well as the mathematical community of the time, and their attempts to solve this problem, for which Fermat claimed he had a proof — but did not provide any… proof. Then, a sense of the broadening of mathematical Europe over the 18th and 19th centuries, as new and wonderful mathematics is discovered, yet a solution to Fermat’s problem evades even the great Euler. Big names in maths, from Sophie Germain to Cauchy, did not find a proof, though in their efforts, new maths is developed, some of which spins into whole new areas of research. Prizes begin to be offered. Singh touches on some of the great developments of the 20th century, from Hilbert’s program to “complete” mathematics, making it complete, consistent, formal, decidable to Gödel showing the impossibility of these aims. Finally, showing how worldwide a field mathematics has become with the work of the Japanese mathematicians Taniyama and Shimura being then developed by André Weil, in France, Ken Ribet, in the US, as well as many others, culminating in the frenzy around Wiles reveal of his proof of Fermat’s Last Theorem in the mid-nineties.

The book showed how mathematics builds upon itself, through the collaboration and contribution of many thousands of people all over the world. It showed me the excitement that goes along with the study of maths. It made me fall in love with Maths.

“When students hear the story of Andrew J. Wiles’ proof of Fermat’s Last Theorem, it is not the result itself that stirs their emotions, but the revelation that a mathematician was driven by the same passion as any creative artist.” – Jesefina Alvarez

Fermat’s Last Theorem states that x ^ n + y ^ n = z ^ n has no integer solutions x, y, z, n for n greater than 2. A simple statement which even a secondary school student could understand was constructed by Pierre Fermat. Yet the proof of such a statement had eluded the greatest minds for over 300 years before it was solved, and this book beautifully weaves the story of the many inspirational, creative and even tragic events which took place in the quest to find the solution.

This book turned out to be much easier to read than I expected. Considering that this theorem consists of some of the most complex, ingenious and elegant ideas put together, it is abstracted away well enough for anyone to read. It points out the fundamental ideas required in the proof such as induction, modular forms and elliptic curves, without getting bogged down on the mathematical details.

This is what allows the book to shine. Yes, there is some maths here and there, but fundamentally this book feels like a story. Each step of the journey you look into the lives of the people who pushed maths to new boundaries in the step to solve the elusive theorem. We look into the lives of those such as the mathematical genius Euler, the political activist Galois, the woman who broke stereotypes Germain and many, many, more, culminating in the final successful proof by Andrew Wiles. I think this book wonderfully brings the story to life by showing the many trials each of them faced, and due to this, I must say that I found the final story of Andrew Wiles’ successful proof after hundreds of years of failures being very emotionally powerful.

I recommend this book to anyone, not just mathematicians, who want to discover the beauty and creativity at the heart of mathematics.

All of our video book reviews can be seen on our YouTube channel.