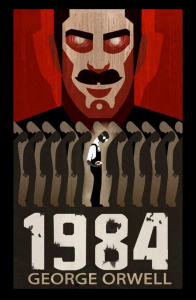 Never has a book had such a profound effect on my thoughts and the way in which I view aspects of my life that I had previously considered trivial. In this masterpiece, Orwell does a superb job of highlighting how a totalitarian state is one of the most unpleasant social outcomes that one could desire, and also of demonstrating how language and attitude are effective methods of control.

The dystopian novel, which was published in 1949 is set in the future year 1984, although whether or not this is the actual date is debatable, since there seems to be extreme manipulation of facts and other data by the governing body, also known as the Party. In this tyrannical totalitarian state, a supreme ruler called Big Brother, who may or may not exist, is praised, worshipped and effectively loved like a God, but the reader never actually encounters this character and there is some doubt as to whether he is a metaphorical figure in the society.

Perhaps the most interesting aspect of the novel is the way Orwell demonstrates that history is what people remember it as – in essence, he obliterates the idea of an objective history. In this world, history is constantly being rewritten or ‘corrected’ so that the Party, and Big Brother in particular, seem perfect. If something is written out of history (i.e. out of all text books, newspapers and every other form of evidence apart from someone’s memory) then it is as if the event never actually happened, or this is what Orwell seems to be suggesting at least. An example of this in the book is the fact that Oceania is constantly changing its allies and with whom it is at war (Eurasia or Eastasia.) If it is at war with Eurasia, and is allied with Eastasia, then all evidence that it was once at war with Eastasia is destroyed and it will be as though it has always been at war with Eurasia. The interesting thing about this is that the people of Oceania do not recognise that Oceania is constantly changing its allies and enemies and they come to accept the new war as the war that has always been going on. It is suggested that very few people outside of the Inner party know about this but those who do seem to just ignore it.

The novel’s protagonist, Winston, is interesting in several ways. He gives a very useful insight into the totalitarian nature of the world by writing an entry into his diary in the first chapter, and then fearing for his life, since this seems to be against one of the laws in Oceania. He also acts as the main source of rebellion in the novel, and commits several rebellious acts, such as writing a diary, having sex with Julia and his entire attitude towards Big Brother and the inner Party. Unlike his lover Julia, his hatred of the party’s ideologies stem from more than a desire to live a particular life. He hates absolutely everything that the party stands for, and would happily see it burnt to the ground, whereas Julia’s rebellion is more of a desire for individual freedom and less concern for the overall picture.

Overall, the novel is highly evocative and makes the readers ask relatively deep questions about some of our fundamental ideologies. The ideas which he brought up in this novel like “newspeak” and “doublethink” will always remain a part of our literary culture.