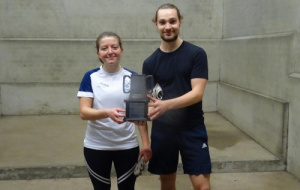 Marjolaine Briscoe (2017, Earth Sciences), captain of Oxford’s Eton Fives team, was part of the winning first pair in the Varsity match this month.

Eton Fives involves hitting a small, hard ball with gloved hands. It’s played in a three-sided court that has a step across it, a buttress, and many ledges. Fives is played in “doubles”, with one pair competing against the other.

Visitor in the Creative Arts update

Since arriving in October…

Why does history matter?

On the 13th of February…

Insights from US Trade Surveillance

Miles Kellerman holder of an…