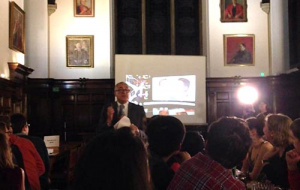 Members of the College gathered in Hall on the evening of the 2015 UK General Election, Thursday 7 May, to watch the results as they came in live.

“Hall was buzzing at the Election night special, with standing room only as everyone waited for the results to come in. It was brilliant to have Sir Ivor’s commentary guiding us through, telling us what to look out for and anything significant in the results. The event went on all night, with some students staying right through until 6 or 7am. It was a very exciting evening, especially as the results were not what anyone was expecting, and I think we all really enjoyed watching the election unfold together.”

Sir Ivor Crewe, the Master, commented:
“There have been 18 leaders of the Labour party since 1900, of whom only three – Attlee, Wilson and Blair – have won an election outright. (Macdonald, Callaghan and Brown have been Labour prime ministers but not by virtue of winning an election.)

What do the three have in common? They are all Oxford graduates, of whom two were members of Univ. Clearly Labour’s path to future success lies in electing an Oxford graduate, preferably from Univ.”

Our thanks to Clare, Chris and Rhea from Nice Tree Films for all their hard work and special thanks to Vicky Olive (2013, PPE) for stepping in at such short notice as our student reporter.