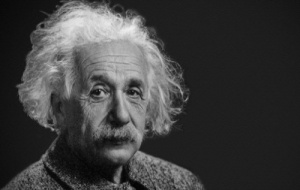 Andrew Robinson (1975, Chemistry) is speaking at the History of Science Museum tonight inspired by Einstein’s blackboard, the museum’s most famous object. He is the author of two biographies of Einstein, Einstein: A Hundred Years of Relativity and Einstein on the Run.

He will explore Einstein’s relationship with Oxford and Britain, the subject of his latest book, in his talk. British science inspired young Einstein’s physics; in 1919, British astronomers made him world famous; in 1933, Britain saved his life from Nazi death threats by offering him sanctuary—first in Oxford, then in rural Norfolk. Patrick Moore, former President of the British Astronomical Association and the original presenter of BBC’s The Sky at Night, called Robinson’s first book on Einstein, Einstein: A Hundred Years of Relativity, “By far the best book about Einstein that I have ever come across.”

Andrew Robinson is an author and journalist who has written over 25 books covering the history of science, palaeography, and Indian history. He has written seven biographies, including books on Jean-François Champollion, Thomas Young, and Satyajit Ray.

You can read more about Einstein in the article Andrew Robinson wrote for the latest issue of The Martlet. You can also read his article on how Britain saved Einstein in BBC History magazine. Alternatively, you can hear about the feature article he wrote for the June issue of Physics World on their podcast.

The talk at the History of Science Museum begins at 6pm tonight (Thursday 12 December).

In Scandinavian folklore, Tomtes are…

The Gatehouse is an open-door drop-in…