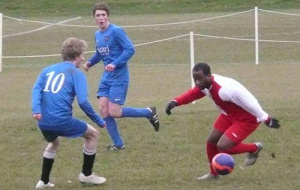 As a long-term supporter of the Devas club, University College holds an annual football match with the club in Oxford.

This year’s match was held on Sunday 3 March at St Edward’s School, Oxford. The Devas club won 6-2. The match was rearranged due the pitch being frozen on the original date in January – so thanks are due to St Edward’s School for loaning one of their pitches, and to Virgin Active for allowing the Devas lads to shower and change. The Devas lads, who range in age from 17 to 21, were given a tour of University College beforehand. They were shown the Hall, where they had brunch, the College quads and the Library. Apparently they were particularly taken with the Shelley Memorial – and were amused to hear of some of the pranks performed down the years by College members!

Johnny Devas, Chairman of the Devas Club, said, “Thank you so much for all the work you put into making the match happen and making us all feel so welcome. The match is a highlight of the year for the club, and a wonderful reminder of the club’s origins back in the 19th Century.”
We would like to thank Johnny Devas for his support in helping to organise the match, and for coming to watch it.

About the Devas Club

In 1884, Jocelyn Devas, a graduate of University College Oxford started a “Club for working lads” in a room over a coffee tavern in Stewarts Road, Battersea. Two years later in 1886 Jocelyn was tragically killed in a climbing accident in Zermatt. Jocelyn’s Father enlisted the help of his son’s friends, and funded an initiative to carry on the work that Jocelyn had started in Battersea. Arthur L Harding was one of these friends, and was the guiding influence in successfully renovating and then moving to a larger premises in Thessaly Road in 1907. The main purpose of the Club’s work was initially educational. As this function began to be fulfilled by the London County Council’s evening classes, sporting activities began to take precedence in the Devas Club activity programme. A club for girls, sharing the same building was started in 1960. The move of the Covent Garden market to Nine Elms entailed the compulsory purchase of the Thessaly Road property. The City Parochial Foundation acquired an alternative site for Devas in Stormont Road and commissioned the building of the present accommodation. The building was officially opened in 1970.

The Devas Club is run from its own purpose-built four-storey building on Stormont Road, Battersea, London. Devas has provided a variety of activities for young people from this location since 1970. Over the years some of the activities provided have changed considerably. A dance studio, a recording studio and a silk-screen workshop now inhabit the space that historically housed a rifle range. The main floor also houses several social areas, a computer suite, table tennis hall and an art room. The upper levels provide a large gym with weights room, and several meeting and rehearsal rooms. There is an enclosed Basketball court on the roof.

There is a supported Univ-Devas Internship to support work at the club and help run selected activities for a suitable Univ student for some weeks over the summer. Full details are available from the JCR and WCR.