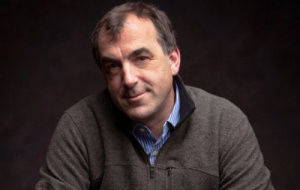 Alex worked as a journalist for The Guardian and other newspapers before moving to the United States in 1994. His latest book is The First Wave, a national bestseller published in May 2019 to mark the 75th anniversary of D-Day.

After graduating from University College, Oxford, Alex was awarded an honorary doctorate in military history from Norwich University, for whom he penned the bicentennial history, Citizens and Soldiers. He is a board director of Friends of the National World War II Memorial. He lives in Savannah, Georgia, and regularly leads battlefield tours and lectures on World War II. His 2012 book, The Liberator, was made into a drama series aired by Netflix in 2020.

The Colby Award is now in its 22nd year and is presented annually to a first solo work of fiction or nonfiction that has made a major contribution to the understanding of military history, intelligence operations or international affairs. It was named for the late ambassador and former CIA director William E. Colby. Previous Colby Award recipients include Paul Scharre, Nisid Hajari, Thomas McKenna, James Bradley, Nathaniel Fick, Jack Jacobs, Dexter Filkins, Marcus Luttrell, John Glusman, Karl Marlantes and Steven Sodergren. As award selection committee chair, Alex will lead the selection process, attend the Norwich University Military Writers’ Symposium and engage with authors, professors and students and the Norwich University community at large.

Alex commented, “It’s a great privilege to help discover and then truly promote great new writers who are telling powerful and important stories.”

Director of the Griffith Institute

Dr Maren Schentuleit has been named…

Phil Power has been elected…