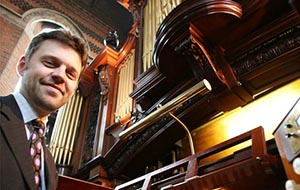 An ambitious plan to complete J.S. Bach’s unfinished work, the “Orgelbüchlein”, is reaching its closing stages.

The project, devised and curated by William Whitehead (1990, Music), brings together leading composers from across Europe to finish the collection of short organ chorales.

Bach began composing the “Orgelbüchlein” – Little Organ Book – in around 1713, and although his intention was to write 164 compositions, he only completed 46.

William said, “I’m thrilled that we’re reaching the final furlong of this enormous project, and that so many composers, the Bachs of today, have come onboard with the idea. There are some quite brilliant responses to the task.” He will play five of the 118 newly composed pieces as part of a live broadcast on BBC Radio 3 on Thursday 18 May and will play a further three pieces at this year’s Proms.

A complete album of the 164 chorales entitled New Orgelbüchlein will be published by Peters Edition over the next two years. The final commissions will be heard next year at a concert in the Festival Hall.

You can enjoy many of the pieces, and follow the progress of the project, at www.orgelbuechlein.com and on Twitter @orgelbuchleinP.