Amanda Brookfield (1979, English) has ended her tenure as Univ’s first Visitor in the Creative Arts after a fantastic year of writing workshops and salons culminating in the Univ’s Next Novelist competition. During this time, Amanda also managed to write her upcoming book, Good Girls, which is out in October.

Amanda held many informal events in her room inspiring students to begin or progress with their writing projects, including sessions on the writing process for different texts (novels, scripts etc.) and even brought Mabel, her golden doodle, in for Welfare Week. She was also a speaker at the inaugural Univ in the Arts Salon, “Inspiration and the Blank Page”,  as well as helping with other Univ in the Arts events that occurred throughout the year featuring writer and neurosurgeon Henry Marsh, CBE, FRCS (1969, PPE) and violinist Sophie Solomon (1995, History and Modern Languages). 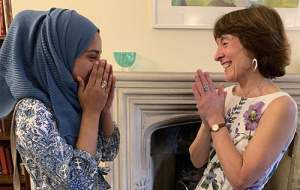 Amanda with Memoona Ahmed, winner of Univ’s Next Novelist

Amanda gave us a rundown of her favourite moments from the past year: 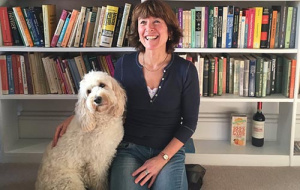 Amanda with Mabel, her golden doodle

Josh Booth (2018, English), Arts Rep, commented: “Amanda really has made my first year. I can’t say enough how much I have enjoyed getting to know her throughout the year, with the many intriguing and sometimes hilarious conversations we have had at her events, which I feel have developed me both literarily and as a Univ student. She will be greatly missed.”

Memoona Ahmed (2018, Experimental Psychology), winner of the Univ’s Next Novelist competition, said, “Amanda has been a beacon of light for me in what has been a tough first year. She’s helped me become more confident, always being there to listen and encouraging me to reach new heights with my writing. I will miss her dearly.”

Amanda’s new book, Good Girls will be released on 3 October and is being published by Boldwood Books. You can follow Amanda on Twitter and her blog, while Mabel’s adventures can be explored on Instagram.

Univ at the Edinburgh Fringe

In April, a team composed…