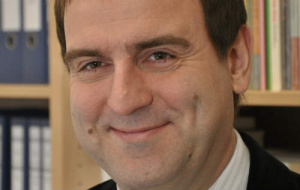 Congratulations to former Univ lecturer Professor Alexander Wöll, who has been named the new President of the European University Viadrina in Frankfurt-on-the-Oder.

This prestigious position was held previously by Professor Gesine Schwan, who was twice nominated as a candidate for the federal presidential elections, and Dr Gunter Pleuger, former German ambassador to the United Nations.

On his election, Wöll commented, “I am excited by the Viadrina’s potential to develop in the next six years into a German-Polish Univeristy’ (from Der Tagesspiegel). The European University Viadrina stands at the German-Polish border on the River Oder, and Poland has long been its obvious partner country. Ten percent of its approximately 6,000 students already come from Poland. However, Wöll is also looking further afield and sees as one of the major goals of his presidency the building of ties with Ukraine and the expansion of the Viadrina’s Research Centre “Borders in Motion” with this aim in mind.

Wöll is currently Professor of Eastern and Western Slavonic Philology at the University of Greifswald and Dean of its Faculty of Arts. However, in 2007-2008 while a lecturer in Czech, Slovak and Russian philology (language, culture, literature) at the University of Oxford, he lived and taught in University College. A colleague, Michael Nicholson, recalls: “Alex Wöll is an outstanding and versatile Slavist, who flung himself into the eccentricities of Oxford life with enormous energy and good humour, never hiding from a heavy teaching-load behind the dignity of his impressive research. Alas, after barely a year at Univ, he was offered chairs by two different universities simultaneously, and, as we can see, that rise to eminence continues inexorably. The many friends he made here in both Junior and Senior Common Rooms recall him fondly and will wish him every success as he takes the helm of the Viadrina.”