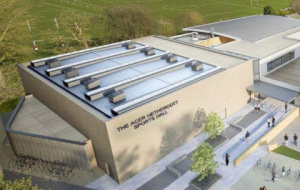 Work is set to begin this month on a £60m expansion of Oxford University’s Iffley Road sports site with the main sports hall, named in memory of Univ OM Dr Acer Nethercott (1996, BA Physics and Philosophy, BPhil Philosophy, DPhil Philosophy), to be the first phase completed.

Dr Nethercott coxed three Oxford crews to victory in the Boat Race and won an Olympic silver medal and two World Championship bronze medals as a cox for Great Britain, he died tragically young of brain cancer in 2013.

Commenting on the naming of the new sports hall Dr Nethercott’s mother, Glynis Evans, said: “The idea of naming the new Sports Centre building after Acer is awesome (to use a word that he himself would have used). It is a source of comfort, as well as one of huge pride, to continue to hear of Acer’s lasting impact and I am deeply touched that the new Sports Centre will be named after him.” Professor Andrew Hamilton, Vice-Chancellor of Oxford University, adding: “We are delighted to name our new sports centre building after Acer Nethercott. Acer was the model of a “scholar-athlete” as he not only achieved incredible sporting success but also excelled in his studies at Oxford, gaining a first and a doctorate in the philosophy of language.”

Subsequent phases of the Iffley Road development will include an indoor tennis centre, combined rugby and rowing training centre, and a new grandstand which will incorporate a cricket school.

A campaign to keep everybody safe…