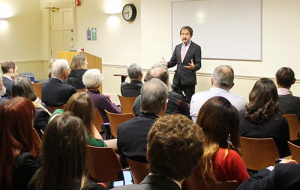 A review of the 2015 Access Lecture delivered by Sir Anthony Seldon.

Sir Anthony Seldon is a political historian and headteacher of Wellington College in Berkshire, an independent boarding school famous for its outstanding teaching but also for innovative attempts to address educational disadvantage under the leadership of Sir Anthony. In 2009, The Wellington Academy was founded – a non-selective state-funded school, sponsored by Wellington College, that is now one of Wiltshire’s top-performing schools. To Seldon, such schemes are critical to properly address the issue of social mobility within the British education system.

Indeed, investigations into social mobility in the United Kingdom have shown there is much to be concerned about. In April 2014, the Sutton Trust reported that the UK’s level of income mobility is particularly poor relative to other developed nations – just as in 2005, the Trust found again that people’s income was tied firmly to the income of their parents. These findings thus suggest a problem (or a set of problems) particular to the UK.

Better-off parents either pay fees for an independent school education for their children, or they pay staggeringly high house prices so that they live in the catchment areas of top state schools that are spread unevenly across the country. Seldon was keen to stress that not all independent schools are full of the children of these well-to-do parents, but the essential result of the entire system is that the children of better-off parents tend to receive the best education, whether in a state school or not. So the question is: how can we sort out this injustice?

Among members of the audience, there was slight scepticism. Paul James, headteacher of the Cherwell School, asked whether the real elephant in the room was the under-funding of state schools – yet, Seldon agreed and spoke of his admiration for the ability of many state schools teachers and administrators to make a lot out of a little. But how does this recognition impact his suggestion that independent schools should take a leading role in their relationships with poor-performing state schools? Others questioned whether his five-plank plan was too institutional in scope – perhaps the real cause of educational inequality and social mobility, in turn, was something much broader.

Regardless of whether Seldon’s solution is the right solution, perhaps the most pertinent aspect of the lecture was his outrage at the sheer lack of action. Certainly, why are we not “frothing at the mouth”?

Radical action is required. In a society in which questions of inequality have recently taken on intense significance, many in the audience shared Seldon’s bafflement over the lack of action over social mobility. We should be asking our political leaders why they are not promising anything of substance regarding education, and why they are not proposing innovative solutions of the same scope as those suggested by Sir Anthony Seldon. As our own Master remarked at the close of the lecture, Seldon’s enthusiasm was particularly clear. Perhaps if others shared Seldon’s enthusiasm, and acted accordingly, the UK would be on track to becoming a more socially mobile and just society.

Thanks to Max Shock for the review. Listen to the Podcast via iTunesU here.

A service of thanksgiving for the life of Mary…