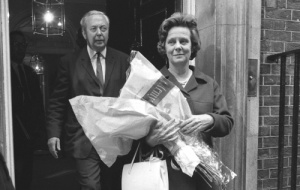 A service of thanksgiving for the life of Mary Wilson was held on 26 November.

Baroness Wilson died on 6 June 2018, aged 102, the only spouse of any UK Prime Minister to have died a centenarian.

The service, which took place at the Guild Church of St. Martin-within-Ludgate, a charming Wren church near St Paul’s Cathedral, was intimate, with music provided by a choir comprised of family and friends.

Dr Robin Darwall-Smith (1982, Classics), College Archivist, attended the memorial service as the College’s representative on behalf of the Master, and sang in the choir. He commented that it came across during the service just how much Mary Wilson was liked and esteemed.

We extend our deepest sympathies to Mary’s family in particular her two sons Robin and Giles.