A Month at the Grameen Bank 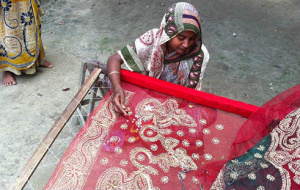 Current undergraduate Hayden Cooke (2011, History) has set up a travel blog for his month in Bangladesh.

“We spent today at a couple of the sister organisations of the Bank. First, it was a visit to Grameen Shakti, an organisation seeking to provide renewable electricity and energy to the rural poor, largely off the national grid, which is currently 47 percent of the population. Even those 53 percent with coverage suffer from almost daily power outages.

The company has been operating since 1996, and has so far installed solar panels in over a million homes, an incredible feat earning the company numerous international awards. It hopes to reach its second million by 2015, currently installing c.25, 000 systems each month. That 46 other organisations have only implemented one million solar panels between them puts this achievement into perspective…”

Read more in the blog.

Hayden’s trip was supported by the Univ Old Members’ Trust.