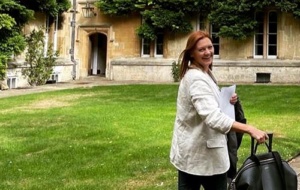 I was pondering exactly that as I left Univ on Sunday morning after twenty hours or so within its walls for the 1993-1996 Gaudy. The current zeitgeist would dictate that my answer ought to be that it’s all about the people, that it’s the community that makes the college—and of course I had been very much looking forward to catching up with old friends—but I can’t help wondering if quite so many of us would have made the effort if the reunion had been held in, say, London? On my very first visit to Oxford as an impressionable twelve-year-old, I had been awestruck by the beauty of the architecture—those dreaming spires and low-beamed pubs at every turn—and that feeling never left me, even after many years (seven!) as a student in the city. My memories of time spent in Univ are thoroughly steeped in its ancient buildings and quads and rabbit-warren network of corridors, and it was more than a little reassuring to see that none of that had changed.

Given it’s been almost three decades since we matriculated, surely all of us couldn’t have aged quite so well as the college?  Yet, as we congregated for tea in the Master’s Lodgings, the refrain I heard most often around the room was “You haven’t changed a bit!” And everyone did indeed seem to look the same, although that was possibly belied by an inspection of our matriculation photo, during which we all marvelled over how young we looked in it—and also marvelled at some of the questionable hairstyles…

The excellent dinner in Hall provided more opportunity for memories to resurface, with the wonderful Naomi Grimley leading us by the hand back through the years to a time long before mobile phones, when even email was newfangled and you could get a cuppa at JCR tea for three pence. Afterwards, we descended to a smarter and brighter Beer Cellar than exists in my memories, though the animated chatter and crush of bodies was just the same. An unexpectedly good night’s sleep in a college room that felt remarkably familiar led to breakfast from the swanky new Buttery (some things have changed, after all) and more reconnections with old friends—and then, all too soon, the Gaudy was over.

So what does make a college? A curious mix of all things, I suppose: the buildings and the people, the traditions and the ethos—and, perhaps most importantly, the way we hold it all dear in our memories. I always felt it was a privilege to have been invited to be part of the Univ experience for a time, and it was a privilege to be part of it once again, even if only for one night. My thanks go to all the staff and faculty who made it possible.

It couldn’t have been a lovelier day…