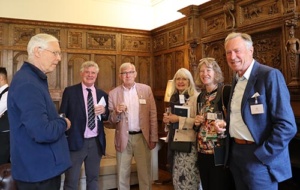 In one of Michael Frayn’s less-celebrated stage comedies, Donkey’s Years, the action centres on the return of several Old Boys (yes, that was then – Boys) to their college for a reunion. The Head Porter, Birkett, shows the first to arrive, C.P.D.B. Headingley, to his overnight rooms:

And indeed the 37 returnees for our own Univ Reunion were often caught saying much the same thing. On closer inspection, though, you could trace significant change – part of what had been the History Faculty on Merton Street was now remodelled as a New Library for Univ purposes, the Servery was spanking new, and there were now many spaces for group study. But plus ça change… Indeed, as Jack Zoeller reminded us in his speech over lunch, there was much that was la même chose, a set of recollections that collided with the immediate present in reminding us that tradition will always (and thankfully) leave its mark even if it requires a Reunion to allow us to remember its ways. Indeed, as Elizabeth Adams and Phil Burnett illustrated in their lucid presentation of the Old Library’s treasures in the afternoon, the past can come alive if treated sensitively. 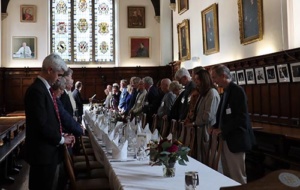 Univ has always been one of the Colleges that has embraced change quicker than others, and, as the Master outlined, the aims of the Beacon Programme now has as its set of priorities a recognition of tactful inclusion and diversity of intake – a clear testament to a welcome response to very changed circumstances since the seventies.

But not wholly. There have been fuel crises before, though not perhaps carrying quite the same threat as laid before us now; more than one mention was made of the 1974 Three-Day week, a rationing of energy and fuel in the wake of strikes and international disturbances, and the announcements in the Oxford Mail of just when we would have to plan essay preparation – and writing – by candlelight. 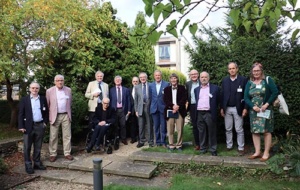 To close the day, the visit to Stavertonia – for many of us – was a vault back in time. As some of us formed the first cohort to occupy what is now known as Univ North, the class of 1972 could never have imagined the plans for expansion that are now on the stocks. Memories of breakfasts in Redcliffe-Maud House were coloured by the need then to stride through mudflats in the winter months also the opportunities to revise in deckchairs in Trinity Term when – if memory serves – the 1975 heat was prolonged and searching.

So, returnees often do feel that the “old place” has not evolved, but that meets wishes for that to be the case. Quietly, there were other strands in the day that were not just exercises in nostalgia, but rather glances forwards, envisioning the rewards of optimism alongside memories of mutual respect and collegial spirit.

Dr Caroline Campbell has been appointed…