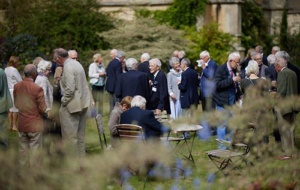 The idea of a diamond anniversary reunion for Univ matriculands of 1960 came originally from Peter Slinn (1960, History), who in 2019 initiated an email correspondence with contemporaries and the College about the possibility of such an event taking place in September 2020. COVID then got in the way, but the correspondence continued, and an anniversary lunch on Sunday 18 September 2022 for matriculands of 1960-62, with guests, was finally decided on. Nearly forty of us returned to Univ for this event, twenty of us with guests, some of us staying the night before and some the night after in the Goodhart Building, which had a particular appropriateness for the 1960-61 contingent, who remembered its opening by the American ambassador in the summer of 1962.

The dress code for the occasion was “smart casual” and as we assembled for champagne in the autumn sunshine of the Master’s garden at 12 noon a number of open necks were evident, some of us having interpreted “casual” in this way, others having discovered at the last minute that we could no longer do up the top buttons of our shirts! The Master, newly returned from rehearsals for Her Majesty the Queen’s State Funeral in London, circulated among us very graciously, making a point of talking to everybody. We then proceeded to Hall, where Grace was read with a Latinist’s accuracy by David Logan (1961, Classics), who carefully substituted Regi for Reginae in the final prayer for peace and concord, evidently doing so for the first time in the reading of the Univ Grace since Her Majesty’s passing. The Master then gave a short speech of welcome and College update. She mentioned first the University’s Opportunity Oxford programme, which had its origin in Univ and is designed to prepare promising students from under-represented backgrounds for an Oxford education, now at graduate as well as undergraduate level; she then spoke of “Stavertonia”, Univ’s burgeoning annexe at Staverton Road in North Oxford, also known as Univ North; and finally gave us the proud news that Univ’s First Women’s boat (W1) won Head of the River at Summer Eights this year for the first time! We then settled down to a delicious three-course lunch, well up to the standard for special occasions remembered by us from our years at Univ, after which the Master left us in preparation for returning to London for the Funeral. Some of us then repaired to the Alington Room for further conversation and reminiscing. My wife and I left around mid-afternoon, but those who stayed that night in College were able, I believe, to watch the Funeral on television in Hall on Monday.

I am sure I speak for us all when I say how grateful we are to the Master for hosting this occasion so genially at what was for her, as for us all, a sad time, but for her a particularly busy one. Our thanks are also due to Tess Raven, of the College’s Alumni and Development Office, for organizing the event. As a granddaughter of Peter Bayley, the College’s English Fellow during our time at Univ, it was a particular pleasure to have her with us on this occasion – for me not least, as the one English graduate among us! And a special thank you must go to Peter Slinn, who sadly was unable to attend the event, but must be given credit for an idea which we may hope has started something for Univ, given the tremendous success of its realisation this September.

It couldn’t have been a lovelier day…